Greta Bauer, Ph.D., is a Professor of Epidemiology and Biostatistics at Western University and a CIHR Sex and Gender Science Chair studying epidemiological methods for advancing intersectional sex and gender science. In part 1 of this two-part series, we spoke with Greta Bauer about intersectional approaches to quantitative health research and her preferred methods for study design and data collection. Stay tuned for part 2, where she will share methods for intersectional analyses. 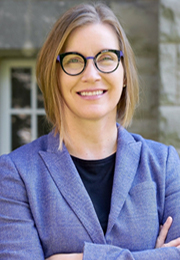 What is intersectionality and why does it matter in quantitative health research?

Intersectionality is a Black feminist theoretical framework with origins as early as the 1850sFootnote 1. The term was first coined by Kimberlé Crenshaw in 1989 to name the experiences of Black women who face intersecting and cumulative forms of oppression and discrimination (racism and sexism)Footnote 2. An intersectional framework assumes that an individual’s experiences are not simply equal to the sum of their parts but represent intersections of axes of social power. For example, the health-related experiences of immigrant women may be different from those of immigrant men and non-immigrant women. In Sex- and Gender-Based Analysis Plus (SGBA+), we discuss intersectionality as an extension of sex and gender analysis, but intersectionality also originates in critical race theory and can be applied across other social identities or positions in society (social positions).

While qualitative intersectional approaches are well-developed, quantitative approaches are less so, because of the challenges inherent in capturing and analysing intersections of social power and their causal effects on outcomes in discrete, categorical data points. A key question in quantitative intersectional research is whose experiences, outcomes, or processes need to be examined or made visible. By investigating population heterogeneity in the context of social power and studying processes of oppression, discrimination and privilege, we can develop interventions that are directly relevant to specific communities. Learn moreFootnote 3.

When should quantitative researchers be incorporating intersectional analyses in their studies?

It should be standard practice to include the ‘plus’ in SGBA+. It’s critical that intersectional factors not be retrofitted after a study has been completed.

Here are a few examples of identity and social position variables and dimensions, as well as processes of oppression, discrimination, privilege, and power that can be included in intersectional analyses. These examples are based on a Canadian context. What constitutes a position of power may play out differently at different intersections, and in different contexts, as will the variables and dimensions that you choose to include in your research.

Tip: Cisgender (or “cis”) is a term used to describe people whose gender identity aligns with the sex they were assigned at birth, while transgender (or “trans”) is used to describe people whose gender identity and sex assigned at birth do not align. Two-Spirit identity, which is sometimes described as a gender identity, transcends Western notions of sex, gender and sexual orientation. Find out more in Issue 2 of our Meet the Methods series: “What and who is Two-Spirit?” in Health ResearchFootnote 4.

What steps should researchers take to conduct intersectional research?

First decide if a qualitative, quantitative or mixed methods approach is most appropriate to answer your research question. If quantitative data will be used, then follow these steps to conduct the research.

1. Decide which intersections should be the focus of research.

Look for existing qualitative, quantitative or mixed methods research that suggests that sex, gender, age, race/ethnicity or other identity characteristics impact different groups in different ways. Questions can also be generated through community knowledge, by engaging with community stakeholders. In the absence of evidence reported in the literature or by communities, be open to conducting exploratory analyses. Data-driven explorations can be used to highlight heterogeneity in existing data that you may not have thought to look for. Regardless of the approach, it is crucial that you identify your intersections of interest in advance.

Include representative voices on the methods design team. Seek out additional community knowledge where needed to better understand the role of social power in shaping the research and its findings.

3. Design a sampling strategy that ensures results can be produced for all intersections of primary interest.

To avoid underpowered analyses, take an intersectional lens from the beginning with regard to sampling strategy. If some intersections of primary interest are unlikely to be sampled in sufficient numbers under a general strategy, plan to include stratified sampling with oversampling of certain groups. An increase in sample size may be required depending on which intersections are of interest to your study.

Multidimensionality refers to the multiple dimensions of identity, social position and processes of oppression, discrimination and privilege. Specifically define intersections of interest and how you will measure research participants’ identities within each dimension. For example, if you are interested in race and ethnicity, participants may respond differently based on whether you are measuring ethnoracial identity, how they are perceived by others or their experiences of racism. If you are interested in gender, some possible dimensions to investigate are gender identity, gender roles and/or norms, gender relations and institutionalized gender.

Tip: Cisnormativity is when we erroneously assume that we know all dimensions of sex and gender when we only know one dimension. For example, in a study on uterine cancer, uterine status could be used as an inclusion criterion instead of sex assigned at birth. This would correctly classify both cis women and trans men who have had hysterectomies.

5. Ensure that study measures are appropriate and valid across all intersections.

Consider whether measures specific to particular intersections should be included. Formulating survey questions will vary depending on the type of study you are conducting and the intersections of interest for your research. First, consider whether you are developing a general population survey or one that is tailored to a specific community. This will help determine which response choices to include, and the level of familiarity your audience will have with the language used in the survey. Then, workshop the questions through focus groups and pre-tests with your target audience to make sure your questions are clear, inclusive and comprehensive. In population surveys, if majority groups misunderstand a question, this can overwhelm responses from numerically small groups and bias your measure. On the other hand, people with multiple and/or minoritized identities may not be accurately captured by improperly designed study measures.

Consider asking an open-ended question before a fixed-choice question. This allows participants to describe how they self-identify. Then ask: “If you had to choose one of the following for the purposes of this survey, which best describes you?” This approach helps understand how people make decisions as to which box to put themselves in. If only open-ended questions are used, ethical concerns arise for researchers trying to subsequently guess what box to put somebody in for quantitative analyses, so it is preferable to just ask them what they would choose. This approach permits the description of the heterogeneity within each category and the acknowledgement of how the provided response options may not fully encompass or reflect respondents’ identities. Learn moreFootnote 5.

6. Analyze data in ways that make the outcomes and effects clear at different intersections.

Find out more in part 2 of this series!

For example, it’s important to acknowledge heterogeneity within an intersection in order to avoid attaching stigma to a group.

The views expressed in this document are those of Greta Bauer and do not necessarily reflect those of the CIHR Institute of Gender and Health or the Government of Canada.

CIHR Institute of Gender and Health. “Meet the methods series: ‘What and who is Two-Spirit in health research’.” CIHR, 2020. Accessed on February 2, 2021.