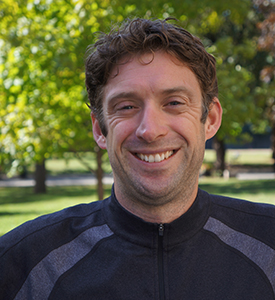 Having incorporated Inuit traditional knowledge and cultural values into his work, Dr. James Ford is keenly aware of the ability of traditional Indigenous knowledge to help Inuit adapt to shifts in the climate.

Associate professor with the Department of Geography at McGill University, Dr. Ford leads the Climate Change Adaptation Research Group. He has spent the past several years looking for ways to strengthen the individual and collective resiliency that has allowed Inuit to survive in one of the harshest climates on Earth. Gathering a multidisciplinary team, including fellow researchers, students, community members and decision makers, he has been actively studying the challenges facing Inuit due to the changing Arctic climate.

The Arctic is seeing the most dramatic climate change globally and the health of Indigenous populations is already being affected. One of the key challenges will be to find ways to adapt.

Dr. Ford's approach acknowledges the complex correlation between climate change and social, political and cultural conditions. He believes the key to understanding and minimizing the negative health effects of climate change lies in finding ways to draw on the strong sense of community among Inuit, as well as their deep knowledge of and attachment to the land.

The focus of the research, with an eye to gender differences, is centered on the societal and cultural dimensions of health, the environmental influences of climate change on health, and on developing a range of holistic responses to these pressures.

Dr. Ford was among the first to note that while their traditional lands are changing, the Inuit themselves are not passive victims of climate change. In fact, it is the land on which the Inuit live that is becoming increasingly vulnerable, and this vulnerability poses a threat to Inuit's well-being and safety.

In circumpolar communities, climate change has resulted in changing conditions, such as thinning sea ice, as well as coastal erosion. These changes are having an impact on the ability of Inuit to secure food from traditional activities like fishing, hunting and trapping.

With his CIHR research grant, Dr. Ford will further investigate the adaptability of the people who inhabit Canada's north. Continuing to study Inuit resilience, observing, documenting and shedding light on how the impacts of change, both climatic and socio-economic, are testing Inuit strength.

Further destabilizing Inuit communities, both literally and figuratively, is the rapidly melting permafrost. Structures built on the frozen land are now shifting, rendering them unusable in some instances. The cost of repairing or replacing critical infrastructure is prohibitive.

Residents of Nunavut were four times more likely to report that they had difficulty accessing food due to inadequate income than the Canadian average in 2011–2012.

Add unprecedented economic development, due to increased resource extraction and shipping, to the mix and we are bearing witness to the rapid changes affecting the social fabric of the Inuit way of life. However, while fluctuating weather patterns, rising sea levels, storm surges and shoreline erosion are affecting this fragile ecosystem, the people continue to display an impressive resiliency.

Before moving to Montreal in 2006, Dr. James Ford, originally from Manchester, England, received his B.A. and M.A. at the University of Oxford before going on to earn a Ph.D. in Geography from the University of Guelph. He is a CIHR-PHAC Applied Public Health Chair and Associated Professor with the Department of Geography at McGill University, where he leads a Climate Change Adaption research group. Understanding the essence of this innate strength is what Dr. Ford and his fellow researchers will focus their work on.

"The CIHR Foundation Grant will allow us to really examine in-depth how Inuit communities can prepare for the impacts of climate change, drawing upon both science and Inuit traditional knowledge and cultural values. What we hope to find will be of relevance not just for the north, but also for communities around the globe facing a rapidly changing future climate."

"The Canadian Arctic is seeing the most rapid climate change of anywhere on earth. This grant will help us examine what can be done to strengthen resilience and reduce vulnerability in light of these changes, building upon both science and Inuit traditional knowledge and cultural values."

His work can be viewed at Climate Change Adaptation Research Group and tracked on twitter @ccadapt.