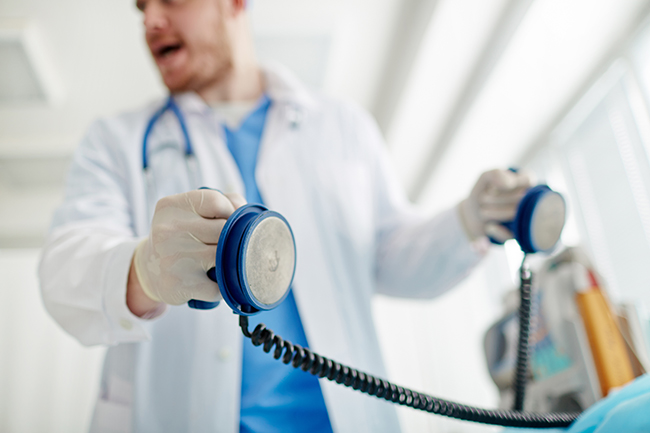 A research initiative that aims to save the lives of thousands of people who go into cardiac arrest outside of a hospital setting is celebrating its three-year anniversary.

The Canadian Resuscitation Outcomes Consortium (CanROC) is a five-year research initiative designed to improve survival rates for people who go into cardiac arrest at home or in a public place outside of a hospital. The project received $3 million in funding from the Canadian Institutes of Health Research and the Heart and Stroke Foundation.

The project addresses a pressing need: an estimated 40,000 cardiac arrests occur outside of a hospital setting in Canada each year, with between 80 and 85 per cent of these cases happening in the home and the rest in a public setting. Although in some communities the survival from out-of-hospital cardiac arrests approaches 15 per cent, in most communities, fewer than 10 per cent of people who are treated by paramedics will survive and be discharged from the hospital.

CanROC researchers intend to improve those odds. The Ottawa, Toronto, and BC groups have clearly shown that monitoring the quality of pre-hospital care to ensure it is of the highest quality improves survival. “Those sites have doubled the chances of survival with hundreds more patients alive each year,” says Dr. Jim Christenson, a researcher in BC and Chair of the CanROC Steering Committee. The project’s other leaders are Dr. Christian Vaillancourt at the Ottawa Hospital, and Drs. Laurie Morrison and Sheldon Cheskes at St. Michael’s Hospital in Toronto.

Through this program, researchers will be able to better understand the Canadian picture of cardiac arrests and with other partners, improve the health system response, thereby increasing the number of survivors.

As part of this program, sites in Toronto, Ottawa, and BC have collected data that combine over 100,000 cases of cardiac arrests into a database dating from 2006 to 2018. This database will become a rich source for observational Canadian studies such as the current survival, pediatric cardiac arrest care and survival, traumatic arrest care and best practices, opportunities for improvement in CPR, and comparison of different applications of airway support, intravenous access, and types of CPR.

The program also seems to be having the desired effect on members of the public, as the number of bystanders willing to perform CPR has increased to more than 40 per cent and more bystanders are prepared to use external defibrillator devices.

While there are still two years left in the funding program, researchers are cautiously optimistic that, with the help of partner organizations, this comprehensive Canadian registry of cardiac arrests and clinical trial infrastructure will be sustainable and become even more effective.

CanROC is partnering with the Heart and Stroke Foundation of Canada to build a stronger network of cardiac arrest survivors to better understand the emotional and neurological problems that may occur after survival from cardiac arrest and to help with policy and advocacy strategies to increase the number of AEDs in public places.

“CanROC is an important program of research for our Institute and CIHR; their research is improving patient outcomes both here and around the world,” says Dr. Brian H. Rowe, the Scientific Director of the Institute of Circulatory and Respiratory Heath at CIHR and the major sponsor of the CanROC network.