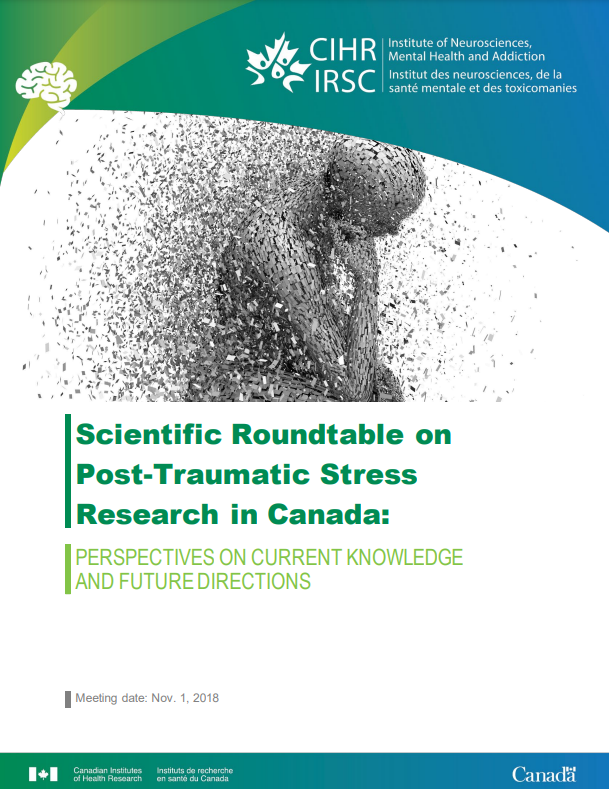 Traumatic stress can occur at any time throughout life, especially following exposure to a life-threatening event or in the aftermath of a disaster or early life adversity. Post-traumatic stress (PTS) can lead to the development of one or more trauma- or stressor-related disorders, such as post-traumatic stress disorder (PTSD).

PTS-related disorders are prevalent in multiple sectors of the Canadian population. It is estimated that PTSD affects 9% of Canadians at some point in their lives.

This roundtable meeting focused on highlighting and discussing knowledge from scientific experts across Canada and represents one component of a coordinated effort being led by the Canadian Institutes of Health Research, Institute of Neurosciences, Mental Health and Addiction (CIHR-INMHA) to develop a national research initiative for PTS.

The primary objectives of this roundtable meeting were to:

PTS Research in Canada: Current State of the Field

A key consideration when researching PTS is to study models of stress in animals in conjunction with clinical cases of PTSD in human patients. This section will explore the current state of the research, as well as knowledge gaps and limitations as they relate to both basic (animal) and clinical (human) research in PTS.

The brain circuitry for stress behaviours in rodents is virtually identical to that in humans. Additionally, using animal models to study disease has several advantages, including the ability to directly test the cause and effect of a stimulus (such as stress), as well as the ability to safely test therapies such as medications commonly used to treat PTSD.

Through the study of brain circuitry in animals, scientists have been able to observe the effects of stress on the brain, and on an individual’s behaviour. For example, animal research has shown that stress can be passed on to others in ways that may have intergenerational consequences.

There are several important considerations when using animal models to study stress, and care must be taken in applying results from animal studies to humans.

Examples of limitations that were highlighted include:

Several themes were highlighted with respect to the clinical (human) studies of individuals affected by trauma- and stressor-related disorders.

Examples of knowledge gaps that were highlighted include:

There is a lack of reliable data on the prevalence of PTSD and trauma- and stress-related disorders among PSP in Canada. In addition, the emergence of PTSD among PSP might be different from that seen in military populations because public safety trauma exposure may be more chronic. It has been shown that the frequency of trauma exposure among PSP is 11 times greater compared to other groups, and the prevalence of childhood abuse is extremely high among this group as well. Furthermore, PTSD among PSP appears to be highest among subsets of this population, particularly paramedics and correctional workers who also demonstrate higher associations of simultaneous illness, such as chronic pain.

Post-Traumatic Stress Disorder is extremely common among Indigenous communities. Many individuals meet all of the criteria for PTSD as identified in the DSM-5, the primary diagnostic manual for mental disorders. Within Indigenous communities, there is disproportionately high exposures to trauma, high negative evaluations of the self, elevated self-harm and suicidal behaviours, prominent sleep disturbances and problematic drug use.

Within Canada, these issues are further complicated by lasting intergenerational effects of PTSD transmission due to residential school trauma. This intergenerational trauma affects children and the entire family unit and constitutes a day-to-day reality that remains prominent today. Furthermore, poverty and despair are common, and many Canadians are unaware of these issues, further contributing to the ongoing marginalization of Indigenous communities.

With respect to PTSD treatment, Western-based approaches have been shown to be ineffective, while Indigenous methods have largely been ignored. These communities need immediate, practical treatments that incorporate an Indigenous perspective, utilizing land-based and spiritual connections to the individual, as well as community ceremonial approaches (e.g. drum circles). Western approaches often diminish Indigenous Peoples’ ability to speak and be heard, and local knowledge is often dismissed, resulting in severely disrupted communication.

A central theme to consider with respect to Indigenous populations, is how to create healthy communities, focusing on enhancing wellness. To do this, we need to be aware of our own biases and pay particular attention to situations where a speaker’s credibility is unfairly diminished. In turn, this will challenge researchers’ and clinicians’ approaches regarding how they conceptualize PTSD and its treatment as it pertains to Indigenous Peoples in Canada.

Diagnosis, Management and Prevention of Trauma- and Stressor-Related Disorders: Scientific Evidence and Considerations

The current state of PTSD diagnosis and treatment is largely inadequate. Most patients begin treatment when their symptoms are severe, and even with Canadian gold-standard treatments, these individuals still remain in the cut-off for PTSD diagnosis. Drop-out rates are as high as one in five, where patients are not completing treatment, do not have access to treatment or are not receiving treatments that actually result in functional recovery.

With regard to scientifically informed treatment approaches, there is a need to address the wide range of PTSD symptoms, including impairments in central functions such as memory, problem solving and decision making, as well as the role of guilt and shame, and the inability to tolerate positive emotions. This shift in thinking about PTSD beyond a fear-based concept was a central theme to this discussion, which focused on psychological, social and biological considerations with respect to diagnosis, treatment and prevention of PTSD.

Guilt and shame have been widely reported in PTSD, but are rarely addressed in the research. This results in inadequate treatment interventions, despite these symptoms being associated with suicidality. Feelings of guilt and shame are the most common reason cited for individuals seeking US Veteran’s Affairs mental health services.

Individuals with PTSD may struggle to regulate their emotions, which can also give rise to difficulties with memory, decision making, attention and processing speed (the time it takes to do a mental task). To date, no treatments exist that incorporate these factors and emphasize early intervention and prevention.

Finally, there are subtypes of PTSD, including the recently introduced dissociative subtype that require additional investigation. It is also recommended that future research on PTSD should use approaches that analyze very large sets of data to reveal patterns and trends, including machine learning and big data.

Poor social support is the strongest predictor of PTSD development following exposure to a trauma. Additionally, family reintegration and problems surrounding loss of identity are also highly relevant to individuals with PTSD. These social factors are poorly integrated into treatment approaches, and this is particularly important with respect to maintaining social context in certain treatments, such as with internet-based therapies.

Social considerations are also essential when applying PTSD research across different groups. Research findings may not apply equally to military populations versus first responders, or with respect to Indigenous Peoples or gender-diverse individuals. In addition, youth populations display reduced tolerance to extended psychotherapies in more traditional settings and may also require unique approaches.

The family context of PTSD represents a significant knowledge gap. This includes the impact of PTSD and trauma-related illness on partners and children, as well as the intergenerational transmission of trauma and stress.

There are few evidence-based drug therapies that follow the Canadian Network for Mood and Anxiety Treatments (CANMAT) guidelines. Furthermore, findings from scientific testing of drug therapies are poorly translated into clinical practice in Canada. In addition, the inclusion of imaging data, inflammatory markers (changes in the concentration of certain proteins in the blood) and genetic markers may be useful in the treatment of PTSD, but their use and cost-effectiveness in Canada is inadequate.

Finally, there is a need to explore biological interventions that are not drug-based, such as neurostimulation (using magnetic or electrical devices to stimulate regions of the brain).

Research Efforts that Should be Implemented in Canada (Themes)

This section is a summary of research goals and recommendations that can be accomplished in the short-, mid- and long-term.

This section outlines recommendations for research areas that may already be present but that need to be more rigorously tested.

This section outlines recommendations for investigating new research areas that need to be tested and refined.