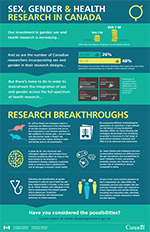 Our investment in gender, sex and health research is increasing...

Our analysis of successful applications in CIHR's Open Operating Grant competitions between 2010 and 2011 found that:

Have you considered the possibilities?