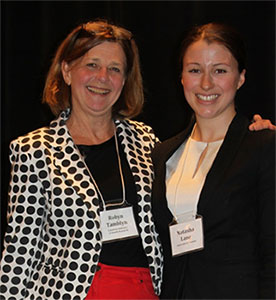 Each year at the Canadian Association for Health Services and Policy Research (CAHSPR) conference IHSPR sponsors a Student Poster Competition. This competition is designed to encourage graduate students to attend and showcase their work at CAHSPR, Canada's pre-eminent health services and policy research conference, and to recognize the outstanding research efforts of up-and-coming health services and policy researchers.

Prizes are awarded to the three top-ranked posters in the amounts of $1,200, $800, and $600, for first, second and third prize respectively. Posters are reviewed by a team of expert reviewers who each devote their time and effort to conducting the reviews.

CAHSPR and IHSPR would like to congratulate the winners of the 2013-14 CIHR-IHSPR/CAHSPR Student Poster Competition:

Winners are encouraged to use their prize money to further their careers in health services and policy research. Congratulations to our winners and we look forward to seeing you at next year's CAHSPR conference!

IHSPR wishes to extend its sincere thanks and appreciation to the 2013-14 CIHR-IHSPR/CAHSPR Student Poster Competition Reviewers: