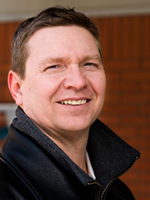 Dr. Keith Fowke, Professor and Head, in the department of Medical Microbiology and Professor in the Department of Community Health Sciences at the University of Manitoba, describes the activated immune cell as a factory with machinery up and running — perfect equipment for the HIV virus to commandeer and use to its own purposes. But when the factory is sitting idle, HIV has nothing to hijack. The intricacies of the immune system and its role in the prevention of an HIV infection have been the main focus of Dr. Fowke's work since his graduate study days.

As a student looking for graduate work, he was offered a project with Dr. Frank Plummer, who was investigating a group of Kenyan sex workers who appeared to be immune from HIV infection. For over 25 years since, Dr. Fowke has brought to light a great deal about the immune system's relationship with HIV infection, including the counterintuitive aspect of immune quiescence. "The commercial sex workers we've studied all have very low levels of baseline immune activation. The main reason we think that is important is that as HIV comes into contact with cells, it will infect and replicate about a 1000 times more effectively in an activated cell than a resting cell." It might be that a quiet immune system is the key to preventing initial HIV infection via the genital tract.

Dr. Fowke is following this line of thinking with two of his recent CIHR funded projects. The first sets out to characterize both the phenotypic and genetic expression of immune system cells (CD4+ T-cells). He suggests that initial immune quiescence limits the number of infected cells and a memory mediated immune response eliminates any cells that do get infected. Another project looks at using currently available and well tolerated anti-inflammatory drugs (aspirin and chloroquin) to quiet the immune response and prevent initial infection. "We're trying to find ways to convert a mucosal environment that is highly immune activated into one that's more resting," says Dr. Fowke. "In a small clinical cohort study, some people will take aspirin or chloroquin and we'll see if the immune activation in the genital tract changes." As part of this project, the lab is developing vaginal rings as a method of delivering the drugs directly to the vaginal mucosa. The study will go directly to non-human primates soon.

Combined with a vaccine, Dr. Fowke believes this work has great potential to reduce HIV transmission. "We have a brand new opportunity to prevent HIV infections in partnership with vaccines," explains Dr. Fowke. "If we can reduce the level of immune activation in the male or female genital tract or if we can reduce the number of target cells in the genital tract, we can reduce the chance of an established infection. Should an infection be established, the potential of a vaccine to clear any infection that does take hold is higher. Because we are trying to intervene prior to HIV starting to replicate, it may mean that we are able to avoid some of the very powerful mutational abilities of HIV."

This research has the potential to change the way HIV is prevented in the future and it is this aspect that inspires Dr. Fowke to continue the work. "Bringing in some new ideas and being part of looking at HIV prevention in a new way is really rewarding and exciting. The lab members in the team are very enthusiastic and they are really driving the projects," says Dr. Fowke.

The Canadian Association for HIV Research (CAHR), the CIHR HIV/AIDS Research Initiative, the Canadian Foundation for AIDS Research (CANFAR), the CIHR Canadian HIV Trials Network (CTN) and the Canadian HIV Vaccine Initiative (CHVI) Research and Development Alliance Coordinating Office (ACO) would like to congratulate Dr. Fowke for his significant contributions to our understanding of HIV. His work is part of a larger Canadian research effort that is making a difference in the lives of those affected by HIV in Canada and around the world.