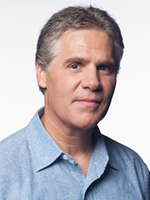 Dr. James Blanchard was working as a general practitioner at University of Manitoba's Northern Medical Unit when he attended a conference that ultimately changed the way he thought about his role as a medical professional — "I realized the dimensions in which someone with a medical background could get involved in international health, and I hadn't really considered public health training during my medical education," says Dr. Blanchard. He applied to Johns-Hopkins University to do a preventative medicine residency. "I became very interested in epidemiology and the science of epidemiology, particularly because it was a very applied and pragmatic science."

Dr. Blanchard's interests took him to India and South Asia where he helped to develop health programs including those aimed at preventing HIV. "As I continued to work in managing programs, a lot of the efforts were focussed on at-risk populations. Through that work I started to incorporate some research methodologies into the projects themselves," says Dr. Blanchard "We try to embed our research into these programs whenever possible. We want to link different concepts from different contexts so that we can develop some transferrable knowledge and develop bodies of knowledge that could be used in different parts of the world."

A major CIHR funded project currently on the go for Dr. Blanchard and his colleagues is looking at HIV emergence amongst intravenous drug users (IDUs) in several cities in Pakistan. "What we've observed through HIV surveillance in Pakistan is that the epidemic has really emerged amongst IDUs, but the patterns of emergence are very different in different cities. Some cities experience very explosive epidemics and in others, the epidemics have grown more slowly." But behavioural patterns like sharing of needles don't appear to be different between these cities. "We are particularly interested in looking at more complex dimensions of injecting drug use. How do IDUs cluster geographically, how are they connected through social and geographic networks?"

Dr. Blanchard hopes the results of this study will shed light on the complex dynamics of drug use and ultimately provide some solutions for prevention. "We're hoping to come up with methods and tools that will help us understand which types of social organizations among IDUs might be more conducive to explosive epidemics and maybe get some clues on how to best intervene, rather than just thinking of it as a general behaviour change/harm reduction program"

As a co-investigator with Dr. Marissa Becker (University of Manitoba) on another CIHR funded study, Dr. Blanchard is looking at the transition of women in sex work and the periods of vulnerability and risk for HIV. Past research has found that in many cases the risk of HIV appears to occur very early in sex work. "There is evidence that a lot of HIV acquisition occurs before women formally consider themselves to be in sex work —prevention programs normally reach sex workers way too late," explains Dr Blanchard. "We're trying to understand the patterns of entry into sex work and the periods of risk during transition into sex work. Is there a period of higher risk sexual activity or transactional sex that is a prelude to emergence into sex work? Are there particular ways in which we could reach women during those periods to reduce the risk of HIV acquisition before they would normally be reached by a more formal sex work program?"

Dr. Blanchard's research reflects the importance of asking the right questions to get the best results. "I think a lot of the research that is done isn't linked close enough with program decisions and strategies. We're hoping to do research that is really asking relevant questions, ones that can guide how policies and programs are designed." And he finds that working in public health is one of the best ways to stay connected to the issues. "It draws you in the community," says Dr. Blanchard. "When I go to work in a place like India or Pakistan or China, I'm working with colleagues who know the issues. It really allows you to engage with people in the community in a way that few other disciplines allow you to do."

The Canadian Association for HIV Research (CAHR), the CIHR HIV/AIDS Research Initiative, the Canadian Foundation for AIDS Research (CANFAR), the CIHR Canadian HIV Trials Network (CTN) and the Canadian HIV Vaccine Initiative (CHVI) Research and Development Alliance Coordinating Office (ACO) would like to congratulate Dr. Blanchard for his significant contributions to our understanding of the HIV epidemic. His work is part of a larger Canadian research effort that is making a difference in the lives of those affected by HIV in Canada and around the world.