CIHR receives its budget primarily from funds voted annually by Parliament. Separate funding is voted for CIHR's administrative expenses (e.g., for staff salaries) and its grants and awards programs. CIHR's administrative expenses represent less than 6% of its total budget. All grants and awards funding must be expended by the end of the fiscal year12 as surplus funds cannot be carried over to future years. There are two budget components: 1. the "base" budget, whose allocation is fully at the discretion of GC; and 2. funding earmarked by the Government of Canada for specific programs such as for HIV/AIDS. This also includes CIHR's share of Tri-Council programs such as the Canada Research Chairs (CRC), the Networks of Centres of Excellence, the Centres of Excellence for Commercialization of Research (CECR) and the Banting and Vanier studentship programs. In the early 2000s, the significant amounts CIHR provided to NCE and CRC programs ($121 million in 2009–2010) were casually referred to as "flow-through funds." Now the view is that all CIHR funds, whether part of the base budget or the earmarked funds, should be applied to achieve CIHR's strategic plan. For example, research partnerships are being forged between NCEs and CIHR institutes. A good example is the Focus on Stroke training program, which is a partnership between the Canadian Stroke Network, the Heart and Stroke Foundation of Canada, and three CIHR institutes.

CIHR's overall budget has increased 2.5-fold since its inception (Figure 3A), and now stands at approximately $1 billion. In addition, CIHR has secured significant funding from more than 400 partner agreements, leveraging more than $100 million dollars in recent years (Figures 3B and 3C).

Figure 3B: Value contributed by partners 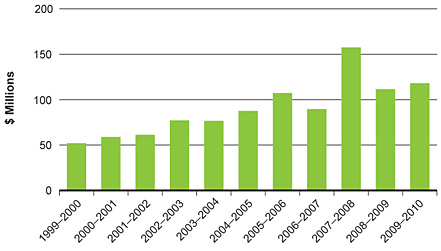 Allocation of the budget

Figure 4A shows how the total budget, excluding CIHR's share of Tri-Council funding is spent on the various types of support that health research requires. The majority is spent on operating grants of various types, although training and salary programs are also significant. In 2006–2007, CIHR elected to no longer provide equipment – in part a recognition of the growing role played by the Canada Foundation for Innovation to support research infrastructure.

Figure 4A: Spend by program type

Figure 4B: Spend by theme

Figure 4D shows the value of all grants and awards (both open and strategic) in 2009–2010 by primary institute affiliation (as self-reported by the grant holders). The resulting data approximates the research capacity within the mandate of each institute. The distribution largely reflects Canada's strong historical funding of biomedical research, since the largest institutes are those that inherited a legacy of biomedical research from the Medical Research Council, while, for example, the Institute of Gender and Health and the Institute of Aboriginal Peoples' Health, had to build their communities of researchers largely from scratch.

According to Statistics Canada,14 total health research funding in Canada was $6.4 billion in 2009–2010 (Figure 5A), with the higher education sector being the largest contributor in the form of the salaries of investigators. The second largest sector is Canadian business enterprise, but its proportional contribution has decreased over the past decade. The Government of Canada contribution is largely the CIHR budget. Private non-profit organizations, mainly the health charities, contributed $599 million in 2009–2010 and provincial governments, largely through their own funding agencies, $362 million. Support from foreign sources, such as the U.S. National Institutes of Health (NIH), the Bill and Melinda Gates Foundation and foreign industry, totalled $867 million.

Most Canadian health research takes place in the higher education sector (Figure 5B). Again, business enterprise ranks second, and its share has remained constant. Very little health research is performed by provincial government departments responsible for public health and health care services. A general feature of Canada's research and development (R&D) enterprise is that the value of research carried out by the higher education sector, expressed as a percentage of GDP, is second only to Sweden. In contrast, the relative value of research performed by business enterprise is low: on this indicator, Canada ranks 15th among OECD nations, well below the average.15

A notable feature of the Canadian environment for health research has been the increased investment by the Government of Canada over the past 13 years in a variety of new research funding programs intended to make Canada more competitive and attractive to international scientific talent. Figure 6 illustrates the distribution of federal funding programs for health research for the 2009–2010 fiscal year.

Another perspective from which to view the CIHR expenditures (including flow-through programs) is in relation to the cost of providing health care in Canada (i.e., $929 million, compared to $183 billion in 2009, or roughly 0.5%.16 Total public sector health research investment is less than 2% of health care costs.

In comparison with budget increases over the decade for agencies in other leading health research nations, CIHR has done well (Figure 7).

Table 2 lists the major CIHR funding programs. The Open Operating Grant Program is the largest, a $405 million investment in 2009–2010, supporting 3,791 grants. There are 225 other active operating grant programs listed on CIHR's public database for 2009–2010.

Figure 8 shows the distribution of grant values (amount per year) for 2009–2010, with open operating grants shown in green shading. The median open operating grant value (as measured by the actual amount expended that fiscal year for all new grants awarded that year) is $107,000 (average $104,000), whereas the median grant value for other operating grants is $77,000 (average $152,000). The latter include grants classified as operating grants but that do not fall within the Open Operating Grant Program such as institute-led funding programs, partnered research grants and grants linked to CIHR research initiatives. There are some large strategic team grants, raising the average value, but the majority of strategic grants are much smaller than open operating grants. This proliferation of small programs is being reviewed through a new approach to strategic investment planning at Scientific Council, including limiting the number of initiatives an institute can launch independently to one per year.

In 1999–2000, the median value of an open operating grant was $67,000. Using the NIH Biomedical Research and Development Price Index17 as the inflator, today's median grant would be worth $73,700 in 1999 dollars (Table 3), so there has been a real increase in the value of these grants. Since most materials and supplies have to be imported from the U.S., the recent rise in the value of the Canadian dollar has further increased the purchasing power of CIHR grants. Although CIHR grants may seem small in comparison to those of the NIH, they exclude investigator salaries and institutional overhead. A separate Tri-Council Indirect Costs Grant program provides $325 million a year to research institutions. The allocation of these funds is based on the grants they receive from the Tri-Councils, using a sliding scale that ranges from 80% to 20% of direct costs, with smaller institutions receiving the higher rates.

For all CIHR's annual open grants and awards competitions, an increase in application pressure has exceeded the growth in program budgets, resulting in declines in competition success rates, as illustrated by Figure 9 for open operating grants. However, several factors have mitigated this decline. The first is that many institutes fund or partially fund additional operating grants that are close to the pay line through the mechanism of Priority Announcements (PA). These are published well in advance of the competition deadline and describe areas of enquiry or types of grants that an institute wishes to encourage. Furthermore, in order to accommodate as many meritorious applications as possible, CIHR imposes across-the-board cuts to the budgets recommended by its peer review committees; for the last four competitions these have averaged 14%. Going forward, CIHR intends to ensure that the value of its operating grants grows with general inflation.