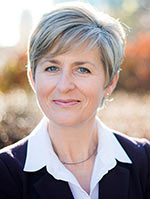 Jeannie Shoveller, BSc, MA, PhD, FCAHS, is the Chair of the Governing Council of the Canadian Institutes of Health Research.  She is the Vice President, Research & Innovation at the IWK Health Centre and a Professor at Community Health and Epidemiology in the Faculty of Medicine at Dalhousie University. Dr. Shoveller joined the IWK in 2020 after a distinguished career as a Professor at the University of British Columbia’s School of Population & Public Health. Previously, she has held several other executive leadership roles, including as the former Director of Research of the BC Centre on Substance Use, the Associate Director of Centre for Gender & Sexual Health, and as the Director of UBC’s Human Early Learning Partnership.

Professor Shoveller has made important contributions across the health sciences, with more than 200 publications. Her research on substance use, gender-based violence, STBBIs, and adolescent health is widely cited. She also has supervised the training of more than 75 Doctoral and Master’s students as well as Post-Doctoral Fellows from 12 countries. Professor Shoveller has held numerous scholarly awards, including a CIHR/PHAC Applied Public Health Chair and a Senior Scholar Award from the Michael Smith Foundation for Health Research. She has served CIHR previously, as a member of several CIHR peer-review panels, including the CIHR Banting Post-Doctoral Fellowship. She also was a member of the CIHR-IPPH Institute Advisory Board (2005-2013). In 2015, Professor Shoveller was inducted into the Canadian Academy of Health Sciences.