With the arrival of spring, millions of Canadians have begun their annual ritual of sneezing and wheezing due to seasonal allergies. A research team at the Montreal Children’s Hospital from the Research Institute of the McGill University Health Centre (RI-MUHC) is bringing them hope with a potential vaccine that nudges the immune response away from developing allergies. The findings published in the journal Mucosal Immunology have major clinical implications since allergies and asthma are lifelong conditions that often start in childhood and for which there is presently no cure.

"Our study, for the first time, offers a potential way of preventing allergies by using a molecule that redirects the immune response away from the allergic response," says lead author Dr. Christine McCusker, allergist at the Montreal Children’s Hospital and associate professor in the Department of Pediatrics at McGill University. "This discovery is very promising since the molecule we developed can be administered by a drop into the nose as a spray."

It is estimated that 20 to 30 per cent of the Canadian population suffers from a range of allergies. Recent research reported that one in every 13 Canadians suffers from a significant food allergy. The reasons why allergies develop remain unexplained, but it is believed that all children are born with the potential to develop allergies. Children without allergies make a shift to the non-allergenic immune response when allergens are around. Those who do develop allergies have not shifted by the time they are exposed to the allergen.

Dr. McCusker and her team from the Meakins-Christie Laboratories started to work on a specific molecule – called STAT6 – which is important in the development of allergic response. They thought that if they could inhibit this molecule they would reduce the symptoms of allergic airways disease, such as asthma, in allergic animals. They also hoped to prevent the allergy from developing entirely. To do this, they developed an inhibitor peptide called STAT6-IP that was given to newborn mice by intranasal droplet. 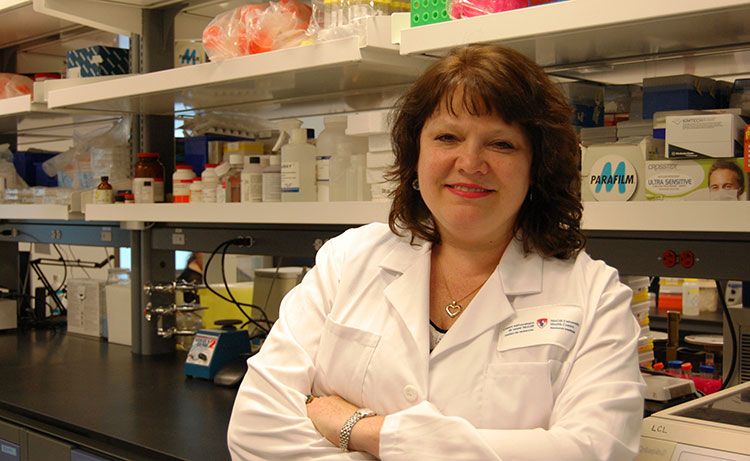 "By giving the peptide STAT6-IP very early on, before allergies are present, we were able to teach the immune system. So when we tried to make the mice allergic later on, we couldn’t because the immune system had ‘learned’ to tolerate allergens," explains Dr. McCusker who is also a researcher at the RI-MUHC.

"What’s beautiful about our approach is that you do not have to couple it with a specific allergen, you only use this peptide. It just redirects the immune system away from the allergic response and then it will not matter if the child is exposed to pollen, cats or dogs, because the immune system will not form an aggressive allergic reaction anymore," adds Dr. McCusker.

"In subjects who have the propensity to develop allergies, their system has made the ‘wrong’ decision somewhere along the line," she says. "It is like educating the immune system to follow the path we want it to follow."

Researchers are now studying the effect of this peptide to see in what other areas this type of immune education will prevent disease, such as with food allergies. They then hope to move this discovery to clinical trials in humans.

The Canadian Institutes of Health Research is proud to support Dr. McCusker’s research.