(2015-07-15) We hope that you will find this document useful and informative. This is the final update to a set of FAQs that has been maintained since the 2008-2009 Open Operating Grant Program Competition.

Q1. How does CIHR arrive at the overall success rate statistics for the Open Operating Grant Program (OOGP) competitions?

A. The success rate statistics given in OOGP funding results include:

In the Funding Decisions Notification for the Open Operating Grant Program competitions, CIHR provides information with respect to funding through the core OOGP budget and funding through other budget sources for the competition. This includes reporting on:

Q2. Why does CIHR include bridge grants in its competition reporting?

A. CIHR includes all grants funded within the competition as part of its competition statistics to be comprehensive on reporting all public dollars invested through that competition. Bridge grants provide funding to investigators that enables them to apply to subsequent competitions while launching or maintaining the momentum of their research and strengthening their applications for future competitions.

A. CIHR moved away from the use of success rates as a barometer for the Open Operating Grant Program. Given factors such as available program budget, increasing size and duration of applications requests, and application pressure, CIHR is not in a position to make such guarantees. However, in February 2008, CIHR pledged to create and maintain a stable Open Operating Grant Program. This included a target to fund a stable number of grants per year. If we look at all the grants funded within each competition, we had generally been able to keep this annual commitment.

Q5. Why is the computed success rate statistic higher than the cutoff in the OOGP committees?

For an explanation of how funding is determined for the Open Operating Grant Program competitions and the linked priority announcement grants see Question 11.

Q6. Will CIHR put more money into the OOG Program?

A. Every year, CIHR carefully reviews its budget and allocates money across its programs to maximize impact and deliver according to all aspects of our mandate. Recognizing the importance of investigator-initiated research and the need to protect and expand the budget envelope for the Open Programs, one of which has been OOGP, CIHR has committed to increasing the budget by $10M per year for five years. So for example, the total OOGP budget envelope has increased from $465.8M in 2013-14 and the open grants program budget will grow to $547M at steady state, an amount that also includes budgets from sunsetting open programs.

Q7. How were RCTs treated in the March 2015 OOGP competition?

A. The March 2015 competition cycle represented the eleventh competition since CIHR integrated applications for randomized controlled trial (RCT) grants into the general competition. This was done in response to a clear need expressed by the RCT community. Combining the RCT and Open Operating Grants funding opportunities into a single competition results in a more stable, sustainable and fully integrated process.

Q8. How is funding determined for the Open Operating Grant Program competitions and the linked priority announcement grants?

For each competition of the Open Operating Grant Program, a core budget is allocated. Once all OOGP peer review committee meetings are complete for the competition and CIHR has in hand both the committee rankings and the application budgets as adjusted through peer review, CIHR staff calculates how many grants can be funded within the allocated core OOGP competition budget.

The overall sequence of funding priority as dictated by peer-review results for all applications in the competition (the overall ranking list) is determined by calculating the percent ranking for each application (i.e. the within-committee rank placement divided by the number of applications in the committee, multiplied by 100), and then combining the percent rankings for all applications into a single overall list. Applications are funded, in rank order, until the available funding is exhausted. This calculation takes into consideration ties in percent ranking across the full set of OOGP committees (i.e. applications with tied percent ranking are either all funded or none of these are funded). An across-the-board reduction to the budgets recommended by peer review is included in the calculation to permit funding of a larger number of grants from the core budget. The across-the-board cut has ranged from 17.5% to 26.8% over the past 5 years.

The percent ranking cut-off for grants funded out of the core OOGP budget allocation for the latest competition (March 2015 intake) was 15.38%. All grants with a percent rank of 15.38% or better were funded from the core OOGP competition budget, unless they were deemed a large grant. Large grants were ranked together, and the top 4 funded through a separate "large grant" funding envelope.

Priority Announcements - additional sources of funding for each competition

Priority Announcements represent additional sources of funding beyond the core OOGP competition budget that are available for funding of highly ranked applications that meet specific relevance criteria defined by CIHR's priority announcement partners. In applying for the OOGP competition, applicants can identify up to three priority announcements to which their application may be relevant.

The percent rank of the first unfunded application will differ from one committee to another once the priority announcements have been applied, as applications in those committees may have been relevant to one or more priority announcements. In total, for the latest competition (March 2015 intake), up to 117 additional applications will be funded through additional sources of funding within CIHR. As a result, the maximum total number of funded grants will be 500 of 2682. While this number can be interpreted as an overall success rate for the competition of about 18.6%, this does not indicate that all grants with a percent ranking of 18.6% or better were funded, or that no grants with a percent ranking of less than 18.6% were funded. A combination of both overall rank order and eligibility/relevance to the published priority announcement criteria determines the next application on the overall ranking list that is funded through the priority announcement process.

In providing the results for a given OOGP competition, CIHR reports on:

Q9. Why did CIHR create a large grant envelope within the OOGP budget?

A. As first announced in June 2010 for the September 2010 competition, a specific part of the OOGP budget has been reserved for large grants. A large grant is defined as being within the top 2% of grant value (post peer review recommendations).

CIHR created this separate envelope of funds in order to manage budgetary risk, given that:

Q10. How are committee peer review rankings used to determine which large grants are funded?

A. The process involves first determining, based on total grant size, the number of applications that are to be considered as "large grants" in the competition. Various scenarios are run on the post peer review competition data (percentile ranking, peer review recommended budgets) with a view to maximizing the number of grants that can be funded both within the $12.5M large grant envelope and within the rest of the competition, while keeping in mind there is a strong desire to fund a reasonable breadth of research (desire to fund a minimum number of grants in total). These scenarios are used to determine whether the designation as a large grant for the competition will include, for example, all applications falling within the top 2% of average annual grant size, or be limited to the top 1%, or the top 0.5%. In comparing scenarios, the outcome that maximizes the number of grants that can be funded both within the $12.5M large grants envelope and within the core OOGP competition budget is the preferred option. During the March 2015 competition, the top 2% of applications in terms of total grant size were considered as large grants. Fifty-four grants met this criterion. Having been peer reviewed within their original committee, the committee ratings for the 54 grants were converted to percent ranks relative to other grants in the committee, subsequently these were combined into a single percent rank list for funding, in rank order, from the large grants envelope until those funds were depleted.

A. A multi-year funding envelope implies that the full value of the forward commitment, over the course of the grants funded, must fall within the funds available. The simplest means of explanation is to provide an example. In this example the first 3 grants are fundable from within the $12.5M envelope. The fourth grant falls below the funding cutoff.

Q12. How does the application pressure compare to previous competitions?

Q13. How do the reforms to CIHRs Investigator initiated (Open) Suite of Programs affect the OOGP?

A. The reforms will replace the existing Open Operating Grant Program.

The March 2015 competition was the final, Open Operating Grant Program competition, which was held in parallel to the first "live pilot" of the Foundation Scheme. Other existing open programs will be phased-out over the 2015-2016 year.

For more information on the reforms to the Open Suite of Programs and the timeline for future Open competitions, please visit the Reforms of Open Programs and peer review section of the CIHR website. We encourage the community to consult this information and in particular the Questions and Answers section to learn about the programs.

In future, researchers can consider applying to either the Foundation Scheme or the Project Scheme, or respond to targeted funding opportunities in their area by consulting the CIHR Funding Opportunities web pages.

If you have additional questions about the reforms beyond what is contained on the website please contact support-soutien@cihr-irsc.gc.ca.

Q14. How do you intend to communicate with us on these important funding-related issues?

A. We are engaging the University Delegates in further discussions on these matters. They will not only provide feedback on these discussions to their Institutions and the research community but can also forward your views to CIHR.

CIHR Funding News, also commonly referred to as CIHR's E-Alert, will be another means of communication with the research community. We encourage those of you who do not already receive this electronic newsletter to subscribe by sending a request via email to Research-News@cihr-irsc.gc.ca which includes your first name, last name and email address. There is no charge for this subscription. 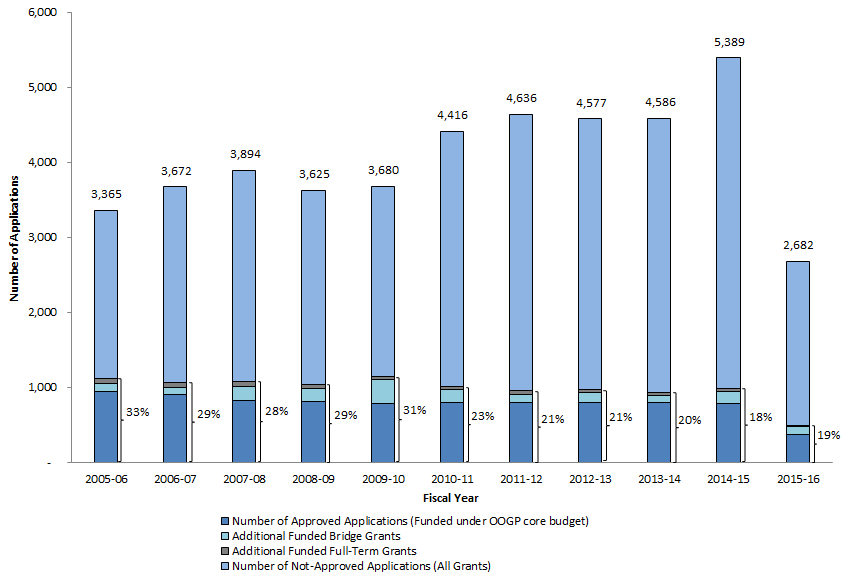 2. Application and Funding Statistics OOGP and Related Programs (Graph including only Fundable Applications - i.e., applications rated 3.5 or above) 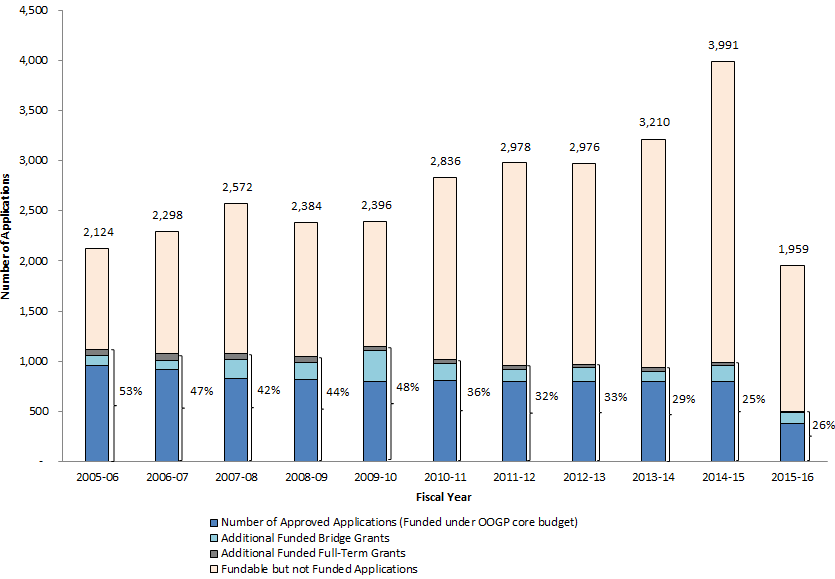