When Jo-Ann Episkenew and Karen Schmidt go into First Nations' schools in southern Saskatchewan they know that, at first, they'll often be welcomed with students' downcast eyes, faces hidden in hoodies, and above all, silence.

They also know that after their Acting Out! workshop, they'll leave hearing these teens, and their stories, in a way that few, if any, have.

"So much of what we're doing is helping youth find their voice," says Episkenew, Director of the Indigenous People's Health Research Centre (IPHRC), based at the University of Regina. "And it's why this play and participation in theatre and visual arts is a mental health intervention for students."

Acting Out! But in a Good Way, launched in 2005 and a Canadian Institutes of Health Research (CIHR) -funded research project since 2009, uses theatre and visual arts-based workshops to help First Nations teens explore and examine choices that affect health and wellness. The project is a collaboration between the researchers, including Linda Goulet from the First Nations University of Canada and Warren Linds of Concordia University, and the File Hills Qu'Appelle Tribal Council (FHQTC) Health Services.

"We've had parents say to us, 'I've seen a difference in my child, he never used to speak, and now he's actually talking'," says Schmidt, a recently retired Health Educator with the FHQTC who helped lead Acting Out! workshops and now acts as a consultant.

The program is based on Brazilian director Augusto Boal's famous Theatre of the Oppressed, which engages actors and audience members alike to transform their lives through the expansive experience of theatre.

"I think it helped us show who we really are," said one First Nation's teen participant of the experience in an Acting Out! workshop this past June. "Because I know a lot of us don't talk in class or talk to each other, so I think it was just easier for us to talk because we had something in common to talk about."

In the past six years, Acting Out! workshops - from one to four days long - have involved more than 500 students in grades seven to 12 at eight FHQTC-area schools, which includes 11 communities focused around Fort Qu'Appelle in southern Saskatchewan. 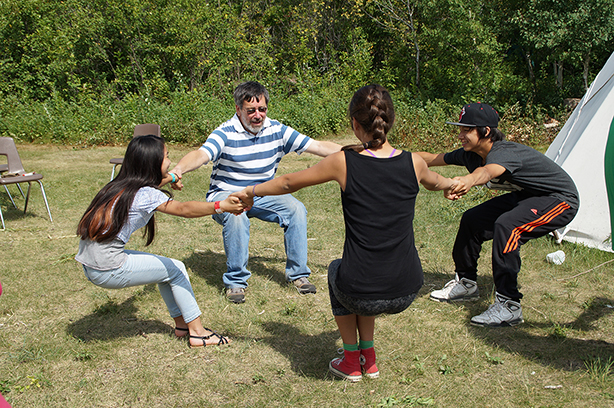 Photo: Alex, Sarah and Jen participate in "Pushing against each other". The activity is about using all one's strength while maintaining a collaborative and consistent rhythm. Photo courtesy of Acting Out!

"We see the arts as both a research methodology and a health intervention," says Episkenew. "It's a format for the youth to tell us about their lives and their reality, and we also believe that the telling of these stories and the reflecting on themselves in relation to others and community is a way of building a strong and healthy identity. We really see this as a way to help youth build strength and maximize resilience."

The program has grown to include visual-arts based workshops, and, based on community feedback, is currently focused on suicide prevention through wellness promotion using the arts.

Schmidt says that while arts-based programs might spark images of make believe, it's through self-expression in theatre and visual arts that formerly silent Aboriginal teens have been able to "take off their masks".

"What I saw was students becoming more aware of what they were feeling and thinking and getting some tools to change outcomes," she says. "Instead of believing that this is how it is for me and this is how it's always going to be, I have tools to make some changes."

This means that getting to the roots of individual mental health challenges involves the "decolonization of the imagination". 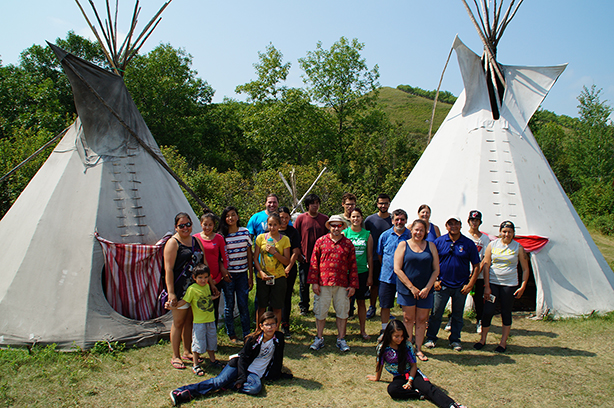 "Our view of health is a holistic one that looks at health issues in Indigenous communities within the context of colonization," says Episkenew, Director of the Indigenous People's Health Research Centre. "Colonial institutions, such as residential schools, regulated children's play, their emotions, and their imagination, and this experience has been passed down to today's youth."

The CIHR-supported Acting Out! action research program, a collaboration between Episkenew, Linda Goulet from the First Nations University of Canada, Warren Linds from Concordia University, and the File Hills Qu'Appelle Tribal Council (FHQTC) Health Services, has provided both research insight and healing for teens.

"Youth suicide comes from a place of despair, where there's no hope," says Episkenew. "So if we can involve youth in engaging the imagination, that's where hope comes from. You have to be able to imagine better opportunities before you can make them a reality."

"As you get down to it the issues they begin to talk about are identity, culture, family dynamics and the environment," says Schmidt,

It's here that an individual child's mental healing can really begin, she says.