Curiosity-driven research expands the boundaries of how we treat and prevent disease.

The Canadian Institutes of Health Research (CIHR) makes significant investments in health research on behalf of Canada and Canadians, support that allows the pursuit of bold, ambitious, fundamental research questions.

This kind of curiosity-driven health research greatly enriches our understanding of basic biological mechanisms and expands the boundaries of how we treat and prevent disease. In doing so, this research also sets the stage for future innovations that will build on these basic insights and, ultimately, lead to improved care and treatment for patients.

The CIHR Open Operating Grant Program directly supports investigator-driven research. It is the foundation of CIHR’s investment infrastructure and represents the organization’s single biggest financial investment, accounting for over 50% of CIHR’s budget.

To maximize support for cutting-edge knowledge creation, CIHR has committed to maintaining a stable Open Operating Grant Program. CIHR established a goal of funding no fewer than 400 grants per competition and has succeeded in maintaining investment at this level over several years.

In 2012–13, CIHR released a finalized design plan for a renewed Open Operating Grant Program and peer review process to maintain the effectiveness of the program. CIHR will ensure through its investments that Canada remains at the forefront of knowledge. In the past year, CIHR demonstrated innovation in how it ensured the research community and knowledge users get the most out of this investment.

It’s beautiful research and very valuable information for the field … a potential signpost on the way to a vaccine.

Funded by CIHR, the University of Alberta’s Dr. Gregory Funk is using an exciting new technology called optogenetics, a fusion of genetics and optics, to explore the brain activity behind the most basic human function: breathing in and out. Optogenetics involves inserting light-sensitive opsin genes into cells and then using a laser to literally switch cells on or off to see what functions they perform. Dr. Funk is using the technology to advance the understanding of brain cells called glia (at left).

Until recently, researchers believed glial cells played a minor, supportive role to neurons. Now scientists think a subset of glial cells called astrocytes play important roles in the processing of information and are vital for brain functions such as regulating breathing. The clinical implications of Dr. Funk’s investigations are significant. For example, premature babies, with their underdeveloped nervous systems, often have bouts of apnea, periods when they momentarily stop breathing. This can cause hypoxia, a deficiency in the flow of oxygen to organs and the brain that is potentially fatal. By using optogenetics to activate or deactivate astrocytes, Dr. Funk hopes to eventually come up with a better way to prevent these life-threatening apneas. 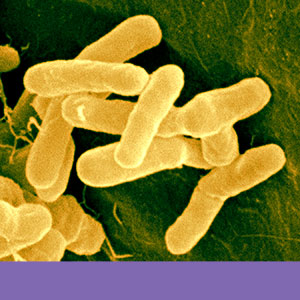 Dr. Ralph Pantophlet of Simon Fraser University has discovered that a strain of the harmless plant bacterium Rhizobium radiobacter (at left) has surface sugar molecules that closely resemble those found on HIV-1, the most common strain of the human immunodeficiency virus. Dr. Pantophlet and his colleagues hypothesize that the Rhizobium sugar molecules can be formulated so that, when injected into the body, the immune system produces antibodies in response, in effect priming the system in case the real HIV invader makes an appearance. The result: the virus would be repelled before it could take hold.

Early tests with an animal model, whose results were published in Chemistry & Biology in 2012, show promise. Leading expert Dr. Dennis Burton of the Scripps Research Institute in California sees Dr. Pantophlet’s Rhizobium findings as helping to find the way forward in the quest for an HIV/AIDS vaccine. “It’s beautiful research and very valuable information for the field … a potential signpost on the way to a vaccine.” Photo courtesy of Dr. Milos Kalab. 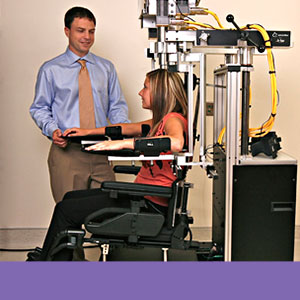 Nothing robotic about personalized care for stroke patients

A research team led by Dr. Sean Dukelow of the University of Calgary is using cutting-edge robotic technology to deliver personalized, tailored treatments to stroke survivors. Typically, physicians must rely on their own observations to rate a patient’s abilities after stroke, a subjective practice that lacks consistency. Dr. Dukelow, a medical doctor who cares for patients at Foothills Medical Centre, is using an exoskeleton robot called KINARM (Kinesiologic Instrument for Normal and Altered Reaching Movements) developed by Dr. Stephen Scott at Queen’s University.

The robot (at left) can precisely assess stroke patients so that their rehabilitation can be tailored to address specific deficits in vision, attention, sensation and movement. The CIHR-funded work is already causing clinicians to rethink established rehabilitation strategies. Dr. Dukelow’s 331-participant study, published in 2012 in the Journal of NeuroEngineering and Rehabilitation, suggests that focusing on restoring motor function without investigating and addressing deficits in “position sense” – the ability to sense where an object is before reaching for it – may be counterproductive. 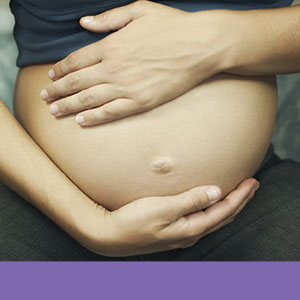 Dr. Anita Kozyrskyj of the University of Alberta is studying how Caesarean-section births (C-sections) may affect children’s overall health by altering the types of bacteria they inherit from their mothers. Despite their negative public image, bacteria play an important role in many aspects of human health, from digestion to immune function. Trillions of microbes call the human body home, forming what researchers refer to as the microbiome. It is believed that some of these beneficial bacteria are passed from mother to child during the passage through the birth canal.

Dr. Kozyrskyj recently published a study in the Canadian Medical Association Journal comparing the bacterial DNA found in the fecal matter of children delivered by C-section and children delivered vaginally. She and her colleagues found that the C-section babies had lower levels of Escherichia-Shigella and Bacteroides, which are bacteria involved in immune function. This variation in gut bacteria could increase a child’s risk of developing illnesses such as asthma and inflammatory bowel disease. As researchers learn more about the impact of delivery method on the microbiome, clinicians and expectant mothers will be able to make more informed decisions about when a C-section is appropriate. The research also provides valuable information that could help facilitate efforts to rebalance the microbiome of babies delivered by C-section.