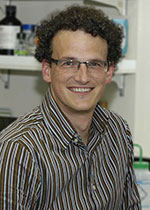 Infections are major cause of morbidity and mortality in humans. Throughout evolution there has been a complex interaction between pathogens and their hosts leading to adaptions on both sides. Dr. Rousseau investigates the intracellular signaling mechanisms evolved by the host to respond and fight infections in the airways. A major focus of Dr. Rousseau’s recent work has been to understand the role of chronic infections in lung tissue destruction in Cystic Fibrosis. Dr. Rousseau discovered a heightened response to infection in airway epithelial cells lacking CFTR (Cystic fibrosis transmembrane conductance regulator), which may contribute to the destructive inflammation responsible for lung tissue destruction over time. Therefore, preventing this heightened response may dampen inflammation, prolonged time to lung transplantation and life expectancy of Cystic Fibrosis sufferers. Dr. Rousseau is currently researching specific signalling pathways that can decrease Pseudomonas aeruginosa-induced inflammation while preserving host defence mechanism. Dr. Rousseau hope by using this strategy to identify target molecules that upon their pharmacological modulation can decrease the excessive inflammation while leaving other cellular functions intact to slow or halt the decline in lung function of CF patients.